How To Cook an Artichoke

I recently watch an episode of Alton Brown’s show where his main ‘guest’ was an artichoke. He always has the best explanations for the science behind cooking which appeals to the culinary nerd in me. He had several very helpful tips for preparing an artichoke. The one that stood out the most was the idea that you should not cover the boiling pot while cooking your ‘choke. What?! I’ve always just put the artichoke in water, put the lid on and boil, baby, boil. Alton had a long, scientific description of why you don’t want to do that, but in layman’s terms, the ‘choke releases a chemical that when trapped by a covered lid, turns the delicious thistle a shade similar to decaying zombie flesh. Ya, not very appetizing… He remedies this by using a steaming basket turned upside down over top the artichokes weighed down by a rock to keep them under water. I don’t have any kitchen rocks, but I had my own ideas of how to accomplish this. I decided that I would just keep the lid partially ajar so that said gases could escape, keeping my ‘choke a beautiful shade of green. Success! 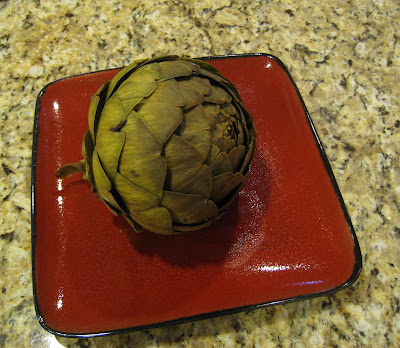 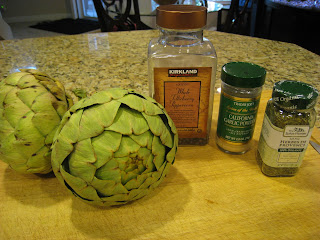 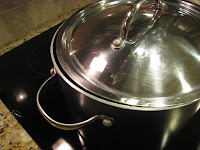 Bring water, spices and artichokes to a boil in a large soup pot with lid ajar. 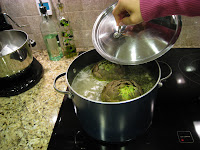 Once boiling, reduce heat to medium so that the water is gently boiling.  Keep lid ajar during cooking process. I recommend rotating the artichoke after 15 minutes so that it cooks evenly. 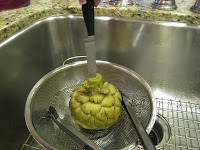 After 30 minutes, check the ‘choke by using tongs to lift it out of the cooking liquid. If you can insert a knife into the heart easily, it’s done. If not, cook for an additional 5 minutes and check again. Cooking time depends on the size of the artichoke. 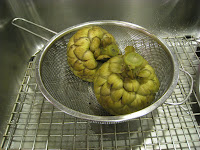 Once the heart is tender, remove artichokes from cooking liquid and allow water to drain off. Serve with lemon garlic butter. 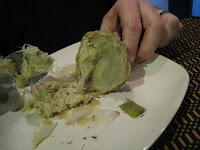 What's Cookin' with Mary?
My blog is a place where I can share the recipes I come up with in my everyday cooking adventures. I have a passion for healthy cooking and hope that I can share some of that and be an inspiration for others. I like to make food that looks good, tastes good, is healthy and simple. Please let me know if you try, or want to try, anything! Always looking for feedback.